Sarcasm in line for the potty

The Question: Has your kid ever said or done something that you didn’t find funny but other people did?

Oh man, I could write a book, but here's just one example. 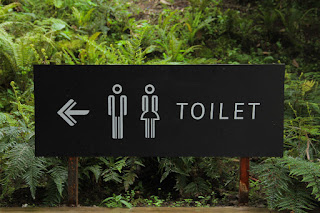 At the time my son was 6, and he thought he was plenty old to use the Men’s Room alone. But I was a bit nervous.

He turned to me and got very serious. “Mom, here’s what I’m going to do in the Men’s Bathroom: I’m going to get on the ground and LICK THE FLOOR!”

The women standing around me thought this was absolutely hilarious. No one expected this young kid to have mastered sarcasm to such a degree.

And yes, I did cave in and let him use the Men’s Room. He was in and out before I’d even gotten to the front of the Women’s line.